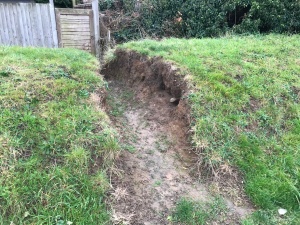 “There was speculation that a handful of tightwad supporters had discovered a secret back entrance into the stadium,,,’

Isn’t it funny how little bits of information from your childhood tend to stick in your mind? With all this new stuff going on you’d have thought there’d be no room ‘up top’ for such trivia a half-century on, but no, they’re still in there. For instance I remember there being a UN General secretary called U Thant; I can name the 5 power stations that used to line the Trent Valley (I won’t bore you); and that the former names of Zimbabwe, Sri Lanka and Iceland were Rhodesia, Ceylon and Bejam respectively (yes I know it’s an old chestnut….). And that I had a friend who every year used to go on holiday “down Deal”.

Of course back then I had no idea where ‘down Deal’ was, and even when I became more geographically-accomplished I still had little or no reason to go ‘down Deal’. Until, that is, this football thing sprang up!

Having set myself the target of bringing all my Step 5 League ‘needs’ down to single figures by the end of this season, I’m acutely aware that I have to be in London most saturdays as it’s the ideal jumping-off point for the Premier divisions of the Wessex, Southern Combination and Southern Counties East, in which resides Deal Town FC, hence my belated need to visit the town. Today’s blast off from my Long Eaton base camp has been brought forward to 5.00am, courtesy of a revised Christmas schedule on East Midland Trains. And with St Pancras being the departure point for all things South East, it looks like that part of the capital will be seeing quite a bit of me this morning.

As I expected to have time on my hands, it was logical to select the furthest flung of the remaining SCEL Premier grounds that I need, and so that means Deal Town, an hour and a half on the faster of the South East trains services to the Channel towns. Having done prior research, I know that two of the pubs I want to visit will not be open until midday, so after arriving in Deal I kill a bit of time by taking a stroll along the minimalistic pier and chatting with the fishermen who are having a tough time chasing some elusive Whiting.

Having encountered a few down-at-heel seaside towns in recent years, I have to say that Deal is bucking the trend by appearing fresh and vibrant. There’s a busy little shopping area, the seafront houses are bright and colourful, and with regards to pubs and bars you really are spoilt for choice. Ordinarily I’d have stepped into one of the Shepherd Neame houses, or even the town’s Wetherspoon, but I’ve only time for three or four, so I must choose sparingly.

I start at the Queen Street Taphouse, right opposite the station. It’s a refurbishment job but definitely works on several fronts, not least of which being the four cask beer engines dispensing ales brewed in the county of Kent, plus 14 keg taps offering a wide choice of styles and strengths. These include some menu standards, but also some local delicacies such as the 9.0% Double Stout produced by Deal-based brewers, Time & Tide. As it’s my first beer of the day I stick to the relatively modest delights of Wantsum Imperium, a 4.0% dark ruby cask ale which is in impeccable condition, and at £2.65 a pint is doubtless priced to compete with the Spoons just down the road.

From here I move on to the Just Reproach micro pub where my timed arrival (12.02pm) sees me grab the only remaining table in a pub that officially opened only two minutes previously! This is a single-room bar with no music or other modern distractions (mobile phone usage warrants a fine) and as is customary in this kind of establishment I’m quickly into a conversation, this time with a gentleman who used to play top level rugby for London Irish, and who is happy to give me the heads-up on other local watering holes. My pint of Goachers Imperial Stout disappears a little faster than I anticipate, as in my eagerness to jot down his valuable advice, I manage to knock over my half-empty glass. Doh!

I’m intrigued by the building across the road which appears to combine a record shop with a craft beer coffee bar. Smugglers is in fact exactly that. Picnic-style tables are laid out amidst racks of new and second-hand vinyl, with other shelves groaning under the weight of some of the finest craft beers money can buy. These are for take-away, or drinking in, and once again I am quickly in conversation with a much-travelled former psychology student and an ex-navy man, about the merits of certain bands, great beers and just about anything in between. A bottle of Wipers & True Milk Shake serves to lubricate the discussion.

With the beer buzz starting to take effect – and the prospect of a twenty-minute walk out to the football ground still to come – I decide to eschew the Taphouse Beer Cafe for the similarly-named Tap Room, on the sea front. This is a keg-only bar but with a good choice of local brews, including those of Time & Tide. I’m attracted, however, by the Cow Juice milk stout on offer from Dover-based brewery, Breakwater, which I enjoy immensely, despite the £5 price tag for what is essentially a modest strength (4.2%) beer. It’s like being back in Dublin!

My culture-sampling session over, I head off past the railway station onto Park Avenue and then St Leonards Road towards the Charles Ground home of Deal Town FC. The stadium is a tidy little affair with a sizeable seated kit stand straddling the half way line on one side, and a covered kit-stand terrace behind one goal. On the other side of the pitch is a plush clubhouse, the roof of which provides some cover for anybody utilising the flat standing on that side. A cursory study of the catering facilities identifies the presence of the ubiquitous chip, while there are bottles of Shepherd Neame Whitstable Bay Pale in the chiller cabinet.

It being Christmas, the Southern Counties East League fixture secretary has conjured up a local derby today against Canterbury City, and it will be a home game for both, as City are currently homeless and ground-sharing at the Charles Ground. Previous results and table position would seem to point to a Deal victory, but City obviously haven’t read the script and are deservedly three up within 30 minutes. Even when we look to have a game on our hands after Town pull one back on the hour, the ‘visitors’ earn a quick penalty and the three-goal margin is restored. There’s just time for a couple of sendings-off – one being the City manager who caps off an afternoon of offering a stream of uncalled-for advice to the young referee by booting a stray ball into the stand – and the day is done.

An entertaining game and the ideal finale to my enjoyable day spent ‘down Deal’. My target now is the six-hour journey back ‘up north’.

Programme: Nicely printed and presented. £1.50 cover price but given away free today in a bid to show regular non-purchasers what they are missing.

Floodlights: Curiously seven pylons, with a gap on the clubhouse side where an eighth (presumably) should be.

Birdlife: No parakeets (yet) in this part of the world.

Toilets: Near the corner flag betwixt clubhouse and covered terrace.

Music the players emerge to: tbh I didn’t really notice, the effect strong beer has on me!

This entry was posted on Sunday, December 24th, 2017 at 6:03 pm and is filed under Uncategorized. You can follow any responses to this entry through the RSS 2.0 feed. You can leave a response, or trackback from your own site.

This site uses Akismet to reduce spam. Learn how your comment data is processed.